When the alarm went off at 03:45 it was a rude shock. The night had been cool with a very heavy dew on the deck. The early start was necessary for us to leave Bundaberg and head northwards to Pancake Creek. Since we are in the depths of the Australian winter, daylight is in short supply - we have on average 7 hours of daylight with very little hew either side.

Getting out of Bundaberg was a straightforward affair with the channel being well lit and our chart plotter guiding our way. The weather gods promised us some fair sailing weather after dawn, but right now, it was a dead calm. We cleared the channel and set our course to just clear the headland that harbours the township of 1770 - for there, it is a mere 10nM further north to Busted Head and Clews Point where we would make our entrance into Pancake Creek. In trip planning, I'd estimated it would be a 12 to 13 hour run and that we'd need to arrive no later than 1600hrs to catch the tide into Pancake Creek.

The weather gods were kind, and First Contact scooted along at a respectable pace, helped with favorable tide, good winds and a touch of diesel when we got under 3 knots. By midday with the breeze strengthening the motor was shut off and we were making 5-6 knots SOG towards our course. Happy days.

Pancake Creek was not a new anchorage for us as we'd visited overnight on the way south last November. But we had not got off the yacht on that visit so we intended to spend a day or two exploring the region. After arriving right on time and riding the tide over the shoal sections of the creek, we dropped anchor just after 1530hrs and poured a glass of wine. There were several other yachts at anchor, and we were joined by our new friends from Woosh! who gave us a cut of their fish caught on the trip up. Thank you Woosh!

Delightful day rolled into delightful night and a dead flat anchorage and cool nights made for good sleeping, while the sunny days made for good walking weather. We stayed a few days longer than first anticipated, but we're happy we did. We got to know a few other people who anchored nearby, and each evening we spent the twilight hours drinking on shore with Lynne and Bob from Woosh! The sand-flies were horrendous but spending time with friends and meeting new people is what the cruising life is all about.

On the morning of the 13th June we decided we needed to get a move on, so pulled up the anchor just after 0700 and headed out into the sea once again to do a quick 26nM hop up to the North Channel between Facing Island and Curtis Island abeam Gladstone. The wind has turned northerly and will remain so for the next few days, with a bit of wet stuff forecast to fall from the sky.

Tomorrow we'll make an early start again and head to Great Keppel Island where we hope to spend a few days exploring the island and its walking tracks.

If you are on your way north, make sure you check out my cruising guide Townsville to TI (Thursday Island). It might be just what you are looking for. 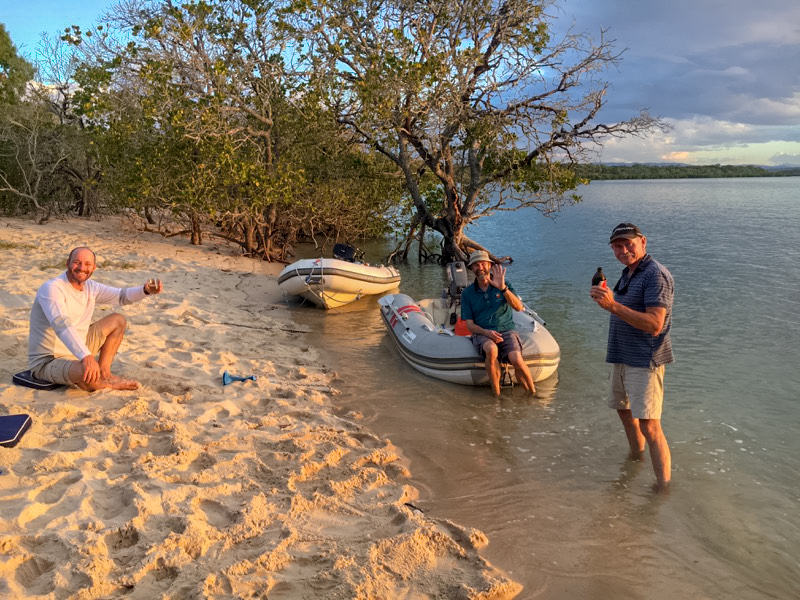